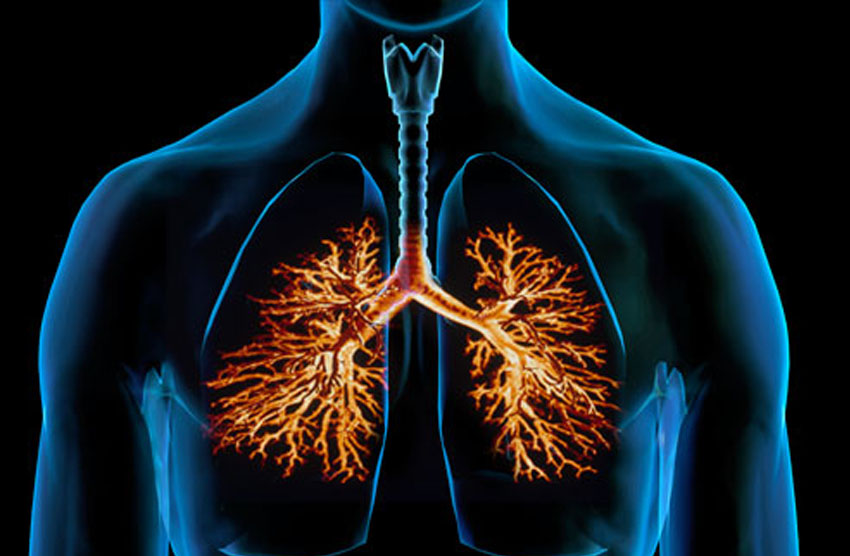 Ayurveda's description of respiration is very brief and somewhat poetic. It says “the prana vayu, one of the 5 types of vatha, traverses from the navel region through the throat, passes out to consume the nectar from the air in the atmosphere and then comes back to nourish the body”. Ayurveda diagnoses respiratory diseases not according to the infection caused by micro-organisms, but rather in terms of the nature of systemic imbalance caused due to respiratory distress. It considers that the respiratory system to some extent is influenced by the state of mind, metabolism and excretory function in our body.

Diseases have their origins in the digestive system, which is the site of accumulation and aggrevation of the doshas. Kasa starts due to the vitiation of apana vayu (one of the five types of vathas governing the elimination of wastes) in the large intestine. When this happens, the vatha is obstructed. The vatha eventually overflows into circulation and relocates to the respiratory system. Additional doshas may mix with vatha. Vitiation of udana vayu (the vatha that governs sneezing, expiration, hiccough, spitting), propels air upward and out of the body. However, in the process, it may start residing in the chest, back or head resulting in pain and cough.

1) Vitiation of vatha dosha cause “vataja kasa”. The nature of cough is dry, with limited mucous. The cough may be accompanied by chest pain and loss of voice. The frequency of the cough is intermittent and may occur in fits.

2) Coughs due to pitta vitiation are called “pittaja kasa”. The cough is more continuous in this case. The infection is more deep rooted (as in pneumonia) and is indicated by larger amounts of mucous (yellow in colour, possibly mixed with blood) & fever

3) Coughs due to kapha vitiation are called “kaphaja kasa.” Large amounts of white, thick and sticky mucous accumulates, and conditions of nausea/vomiting and runny nose tend to develop. Coughing is continuous in this case.

4) Coughs called “ksataja kasa” show symptoms of both vatha and pitta types. Infection or bleeding may cause the colour of the mucous to be red, yellow or black. Fever or joint pains  may follow as symptoms. Blood may also appear in the urine.

5) Coughs due to ksaya occur with conditions like tuberculosis. The condition results in a drying up and loss of tissue (ksaya). While vata dosha plays the most important role in this condition, this condition occurs due to the vitiation of all three doshas.

In Ayurveda, bronchitis is also known as the kasa roga. This condition denotes the inflammation of bronchial tubes, which carry air to lungs. It usually follows a viral respiratory tract infection. The phlegm adeheres to the inflammed mucous membrane thus making it difficult to expel it out. The sticky semi-fluid phlegm may be purulent. The phlegm sticking to the bronchi causes breathing difficulty thus starving the lungs of air. It is mainly cause due to smoking, air pollution, emphysema. Advancing age also tends to have an influence on the development of bronchitis. The main symptoms  are dry/productive cough, shortlessness of breath, slight fever, fatigue, chest pain

Breathing disorders (dyspnoea) are referred to as “shwasa”. These are characterized by the type of breath created. There are five types of Shwasas: ksudra, tamaka, chinna, urdhva and mahan.

1) Ksudra shwasa (heavy breathing) occurs due to anything that stresses the respiratory system. For eg: activities such as exercise, heavy meals etc.

2) Tamaka shwasa is characterized by forceful respiration. This condition is commonly referred to as Bronchial Asthma. Bronchial asthma is an allergic condition resulting from reaction of the body to one or more allergies and is one of the most fatal respiratory disease. According to Ayurveda, this is caused due to the vitiation of the Vatha and Kapha doshas, and the seat of pathogenesis lies in the Gastrointestinal tract.  It can be triggered due to multiple environmental and genetic factors. It is characterized by chronic airway inflammation and increased airway hyper responsiveness. Some of the main symptoms include breathlessness, sense of tightness in the chest, wheezing due to accumulation of mucus in pathways i.e. Bronchi. Attacks typically occur early in the morning, with the patient waking up with an apprehension and alarm, associated with difficulty to breathe while lying down.

3) Chinna svasa is characterized by disturbed or interrupted breathing. When Chinna svasa occurs, eyes gaze downward and one eye may appear red. Chinna svasa often preceeds the onset of coma.

4) Urdhva svasa is prolonged expiration and an inability to inhale. Like tamaka svasa, patients eyes gaze upward and the eye balls may even roll back.

Sinusitis – It refers to a condition where in the air spaces/ sinuses lined with mucus membranes get occluded by purulent phlegm. Sinusitis is often caused by infection spreading from the nose, and are mostly viral/bacterial in nature. Allergy can also cause sinusitis. The main symptoms are headache, tenderness over affected sinuses, heaviness of head, nasal stuffiness, bad breath, facial pain, sore throat, swelling around eyes (more in the morning) etc.

to pacify the aggravated doshas. Proper management includes not only direct care of respiratory system but also the digestive system which is said to be the physical root of disorder. As many cases of asthma can be triggered by emotions, mental equilibrium is equally important for which treatment like sirodhara etc. can be highly beneficial. In case of weak patients palliative therapies combined with oral medications can go a long way to relieve them of their distress.Other treatments like

can be used in the treatments of respiratory disorders depending upon the condition of the afflicted. Nasyam is an important therapy having widespread effect in ENT diseases. Another important factor in Ayurveda treatment is that; not only does it enhance and fortify the immune system, but in the long term effectively fights and keeps diseases at bay.